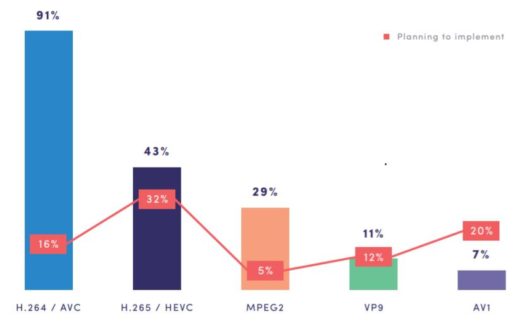 I know Thanksgiving was a couple of weeks ago, but as we close out the year, I want to say thank you to the three suppliers of codec-related usage data—Bitmovin, Encoding.com, and LiveU—and summarize the data they supplied us in 2019. This will put the stamp on what we know this year and set the stage for 2020. I’ll discuss these in the order that they were published, starting with Encoding.com.

Encoding.com publishes its Global Media Format Report right around NAB, and you can download the it here. The report reflects Encoding.com’s production for its customers for the previous year, so the 2019 report is about 2018 encoding. Table 1 shows the OTT codec output (as opposed to intermediate format) in 2018 and 2017.

The report adds valuable insights to the numbers. Regarding H.264, the report states, “We believe its growth was bolstered in 2018 as many customers decided to adopt a dual manifest DASH/HLS fMP4 CMAF workflow before they explored any advanced codecs such as HEVC for OTT delivery.”

Regarding HEVC, the report shared that “in 2018 we can report that HEVC has been promoted to many production workflows and we anticipate a very substantive increase in volume in 2019 driven by UHD HDR content as both premium HDR standards Dolby Vision and HDR+ map to the HEVC video format.” So, the 4K-to-Smart TV outlook is bullish.

However, elsewhere, the report shares that only 3% of HLS production was HEVC and that “we have yet to see widespread adoption.” Many commentators felt that Apple’s support of HEVC in HLS would open the floodgates of HEVC adoption but that clearly hasn’t been the case.

Published in September, the third annual Bitmovin Video Developer Report is survey-based and, unlike the Encoding.com report, doesn’t reflect the production of Bitmovin’s cloud encoding service. This year, 542 professionals from 108 countries completed the survey. Since several of the questions were multiple-choice some total percentages exceed 100%.

For the 2019 survey, Bitmovin asked, “Which video codecs are you currently using and planning to implement within the next 12 months? The black numbers in Figure 1 reflect current use while the red numbers reflect planned usage. The two biggest surprises were HEVC, where 43% were currently encoding with the codec, and 32% planned to over the next twelve months, and AV1, where 7% were already encoding AV1 and an additional 20% were planning to. That would mean 75% HEVC usage and 27% AV1 usage in 2020. 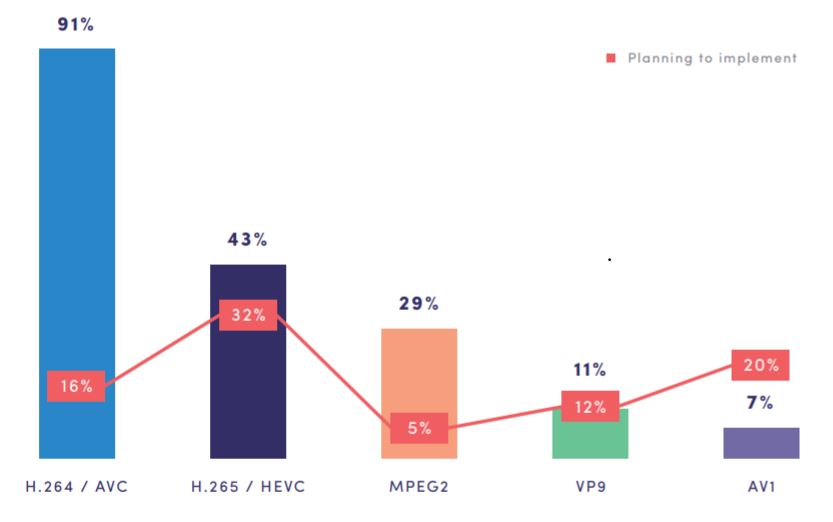 LiveU is a manufacturer of on or around-camera encoders and modems that enable remote video production from locations not supported via Wi-Fi or Ethernet. LiveU has over 3,000 customers in 100+ countries and reports upon their buying habits and usage in December.

The codec-related findings from its “State of Live 2019” report are shown in Figure 3. As you can see, LiveU experienced a 65% growth in HEVC unit sales. As a result, 50% of field units used to stream sports were HEVC-based and there was a 400% growth in HEVC-based sessions. 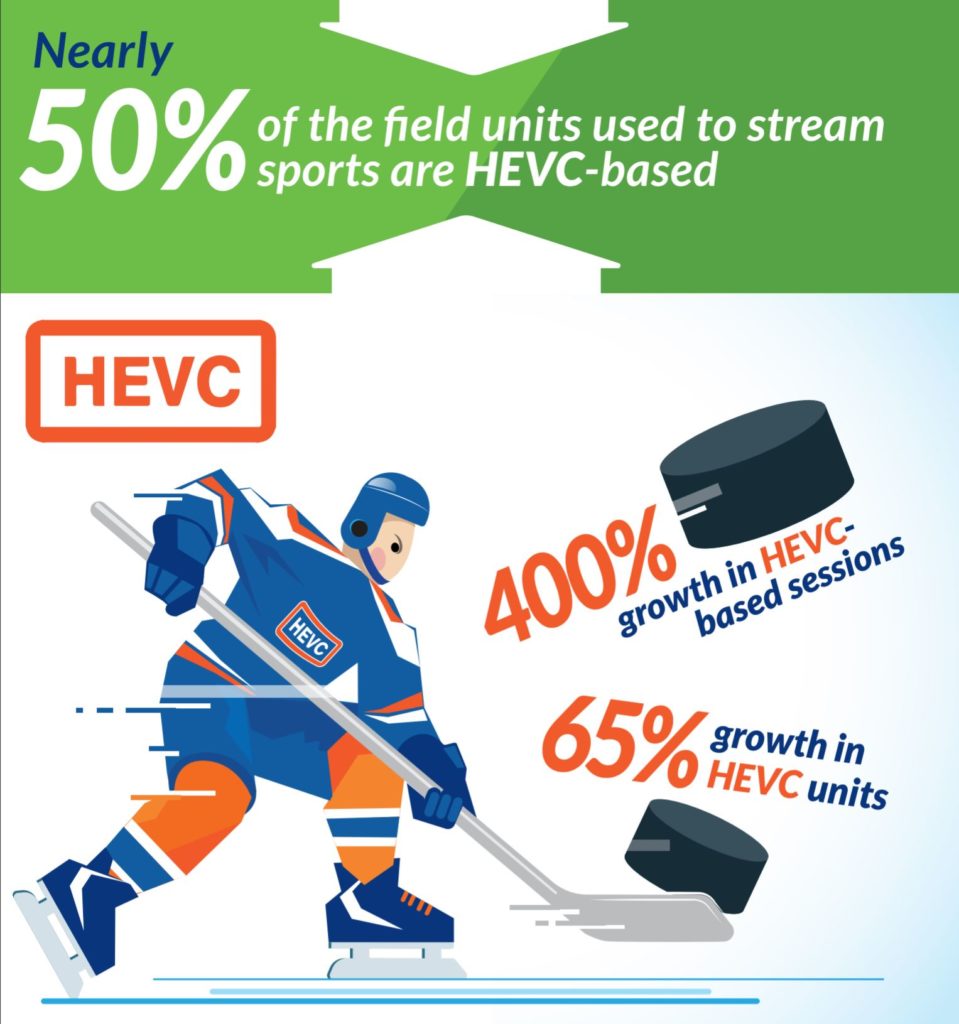 You can’t generalize LiveU’s HEVC usage to the general OTT distribution market, but it does highlight the fact that when a new technology presents a compelling technical advantage within a closed business model that simplifies deployment, like LiveU’s point-to-point transmissions, it can be very successful.

2020 will see the launch of three MPEG-based codecs, VVC, EVC, and LCEVC. While the first two will require hardware for widespread deployment, delaying any real impact for 24-months, LCEVC is already being deployed in non-standard form as V-Nova PERSEUS. In 2020, we’ll learn whether making that technology an MPEG standard will accelerate its deployment.

On the AV1 front, we should see the first devices with hardware-based AV1 playback, and, perhaps the first public deployments of the Alliance for Open Media codec at scale. In the deployments we’ve seen so far, particularly from YouTube, AV1’s encoding efficiency hasn’t been proven; it will be interesting to see if and when that changes and when AV1 starts to live up to the hype.