If you produce live events, there are two relatively recent innovations you should know about. The first relates to supporting multiple playback formats, like Flash, Apple iOS devices, Silverlight and others. In the past, to support multiple output formats, you needed to encode multiple streams, each in the required format. Now that most live events have standardized on the H.264 codec, some more creative approaches have appeared.

The first (to my knowledge) was introduced by streaming media server vendor, Wowza, and they call it H.264-everywhere. You send a live stream to the Wowza Media Server 2 in any of a number of formats and the server will create new files in the container format appropriate for the additional target formats. If your real time encoder creates .f4v files for Flash, the Wowza Media Server can rewrap (or transmux if you like) the file into a .mp4 file for sending off to iOS devices. There’s no re-encoding, with its associated quality loss, just creating a new file in the appropriate container format using the original compressed stream. 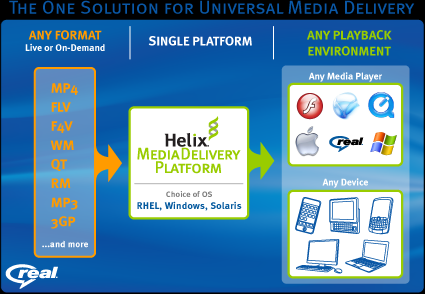 In addition, Microsoft’s Internet Information Server 7 can convert incoming Silverlight-formatted video for playback on iOS devices, again without reformatting. Finally, content delivery network Akamai can convert H.264 streams in one format “in the network” to support additional targets. Bottom line is, if you’re seeking to reach additional target viewers with your live event streams, it should be simpler and cheaper going forward.

The other innovation is called Sorenson Live, and it’s a product jointly developed by Sorenson Media, who sells the Sorenson Squeeze encoder, and operates the Sorenson 360 online video platform, and Kulabyte, who sells a very efficient live streaming server (XStream 2). Basically, this service gives producers the ability to send a single stream to the cloud and have it rendered as separate adaptive streams in any number of formats. This is important because it cuts the outgoing bandwidth requirements for live streamers, and the number of encoders necessary to support multiple format adaptive streaming.

For example, a church I streamed from a couple of weeks ago only had 850 kbps outgoing bandwidth, enough for a single stream of about 650 kbps. With Sorenson Live, I could upload the 650 kbps stream, and the new service would re-encode to any number of lower quality streams – say 500 kbps and 300 kbps — as well as retransmitting the original stream. So, I could offer a three stream adaptive experience with limited outbound bandwidth, and without upgrading my on-site capture and encoding capabilities.

Both innovations let you improve the video experience to your target viewers with little or no additional CAPEX costs.

I help companies train new technical hires in streaming media-related positions; I also help companies optimize their codec selections and encoding stacks, and evaluate new encoders and codecs.
Previous What is Streaming?
Next Less than 1% of Websites Fully HTML5 Compatible