Google Cans Some Flash Ads: Here’s What You Need to Know

Jan Ozer September 2, 2015 Blogs Comments Off on Google Cans Some Flash Ads: Here’s What You Need to Know 301 Views

In a move that went live In late August, Google started blocking some flash-based ads in Chrome. Predictably, the blogosphere went crazy and proclaimed that Chrome dumped flash. While partially true, there are some intricacies to learn to understand the true impact of Google’s move. 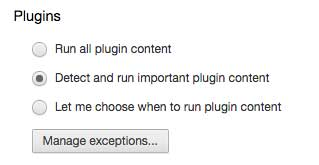 This one simple configuration option started a new round of “Flash is Dead” stories.

In an article for OnlineVideo.Net, I reviewed Google’s move and analyzed what it means for video advertisers. It’s definitely one more nail in Flash’s coffin, but it’s more targeted towards flash advertisements then flash video itself. There are also several very easy ways to avoid the restriction.

In the long run, all video advertising and embedded video playback will transition from Flash to HTML5. We’re not there yet though, as this article explains.