I just saw Vimeo’s “isn’t it wonderful that we’re publishing video with AV1” announcement and felt the need to call BS. First, it’s time to stop calling AV1 royalty-free and promoting the Alliance for Open Media (AOM) as some kind of noble effort to keep video on the web free. Second, don’t tell me that you’re using AV1 to “embrace the open spirit;” tell me how and why you’re using it and show me that it’s better than VP9 and the alternatives.

Regarding AV1’s royalty-free status, in March, Sisvel launched a patent pool claiming that AV1 usage infringes upon the IP of five companies (I was working with Sisvel but am no longer). Every company considering adopting AV1 needs to be on notice that royalties may exist. Continuing to position AV1 as unencumbered isn’t doing anyone any good.

On the noble front, AOM members contributed their video-related IP on a royalty-free basis because that made the most economic sense for them, not because of any virtuous, let’s get together and sing Kumbaya notion that the web needs a royalty-free codec. While this strategy is great for AOM members who all sell other products and services to keep the lights on and the creditors at bay, it may not be right for other IP owners. I’m aware of the due diligence Sisvel did before forming the pool, but have no idea if AV1 infringes upon any of the IP in the Sisvel pool. If it does, these pool members have every right to collect fair and reasonable royalties.

Second, if you want to convince me that AV1 is codec next, don’t tell me that “we’re embracing the open spirit around AV1.” BLECH. Prove that AV1 is a superior codec to VP9 and HEVC and that encoding costs don’t break the bank. Show me comparative videos, encoding parameters, and encoding times/costs.

We’ve heard how great AV1 is, but no AOM member deigns to actually prove it with actual production details. Netflix released a sample video that’s 6.7 Mbps for 1080p24. Yawn. As I reported here, YouTube’s sample videos were 5 Mbps for 1080p60, more aggressive but still not pushing the quality envelope for a post-H.264 codec. While Facebook claims that AV1 delivers bitrate savings of over 50% compared to VP9, as far as I know, they won’t publicly acknowledge that they’re even shipping videos using the codec much less disclose the encoding parameters they’re using. Now Vimeo says they’re “embracing the open spirit” around AV1 but doesn’t reveal any remotely relevant details.

Meanwhile, at IBC last fall, multiple credible companies, including BBC, Harmonic, and Ateme released papers documenting that AV1 had little quality advantage over HEVC and was well behind VVC. My test results fall closer to Facebook’s, but aren’t at scale, and showed that AV1 was still about 35 times more expensive to encode than H.264. Embrace that.

Vimeo’s announcement is the equivalent of a participation ribbon your kid got for making it through softball season. Wow, an AOM member is actually using AV1. That’s newsworthy. In fact, let’s print the announcement and tape it to the refrigerator, right next to the softball ribbon.

I’ve been calling, “Where’s the Beef?” regarding AV1 quality and usability since last October. It’s time for an AOM member to show us substantial bitrate savings at scale in a true production setting. Announcements like this from Vimeo only make me wonder if the beef is actually there. 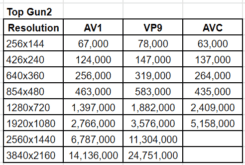 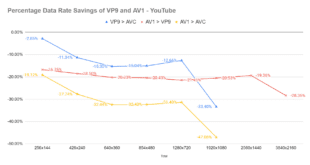