FFmpeg Threads Command: How it Affects Quality and Performance

This article details how the FFmpeg threads command impacts performance, overall quality, and transient quality for live and VOD encoding. The level of testing and analysis detailed here is consistent with the instruction in my book, Learn to Produce Videos with FFmpeg In 30 Minutes or Less ($34.95), and my course, FFmpeg for Adaptive Bitrate Production ($29.95)  (which includes a PDF copy of the book). Don’t just learn FFmpeg; become an expert in video compression.

So, I received an email from an acquaintance that read, “I was curious if there is actually any benefit to a “threads=” type custom command in x264. Specifically many streamers are buying 8 core/16 thread CPUs to encode as a standalone client capturing information from a video capture device.” I had an article on FFmpeg due on the editorial schedule so I decided to run a few tests and see, checking VOD and live.

As we all have learned too many times, there are no simple questions when it comes to encoding. So hundreds of encodes and three days later, here are the questions I will answer.

For those who don’t relish the intellectual exercise of testing and scoring, here’s the net/net.

Now, on to the narrative.

What Does the FFmpeg Threads Command Do?

On a multiple-core computer, the threads command controls how many threads FFmpeg consumes. On my 40-core HP Z840 computer, a threads setting of one (-threads 1) uses one core (that lonely one the third from the right on the top) and about 4% of overall resources.

Here’s the FFmpeg command used during these encodes, obviously changing the threads value as needed. Note that this file is 60p.

What Does FFmpeg Do if You Don’t Specify a Threads Value?

This varies depending upon the number of cores in your computer. If you load the encoded file into MediaInfo and choose the HTML view, you’ll see the encoding settings shown below. I produced this file on my 8-core HP ZBook notebook and you see the threads value of 12.

Pretty much the way you would expect it to. When encoding a single 60 fps file for VOD transcoding, you see the impact on FPS immediately below. 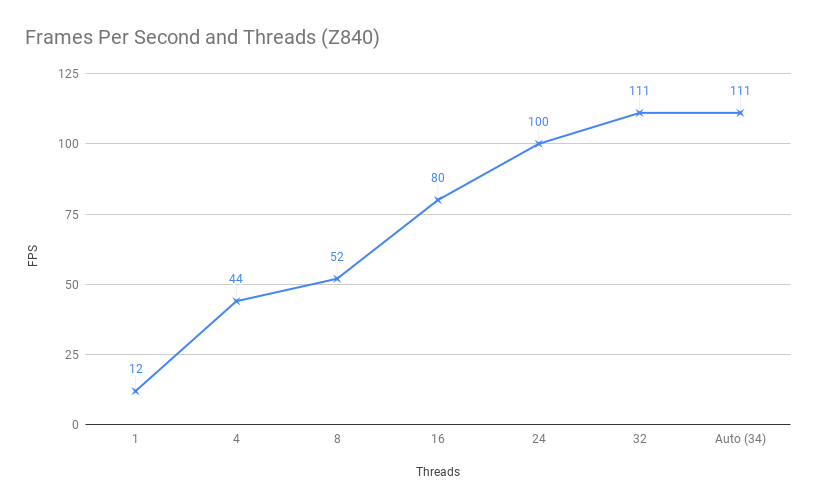 I used the FFmpeg command shown above for these tests.

In a simulated capture scenario, outputting 720p video @ 60 fps (using the -re switch to read the incoming file in real time) you get the following. As you can see, using settings for 1 and 4, the computer couldn’t output the stream at full frame rate. In this application, when I didn’t specify a threads value, FFmpeg assigned 22 threads to the encode as compared to 34. 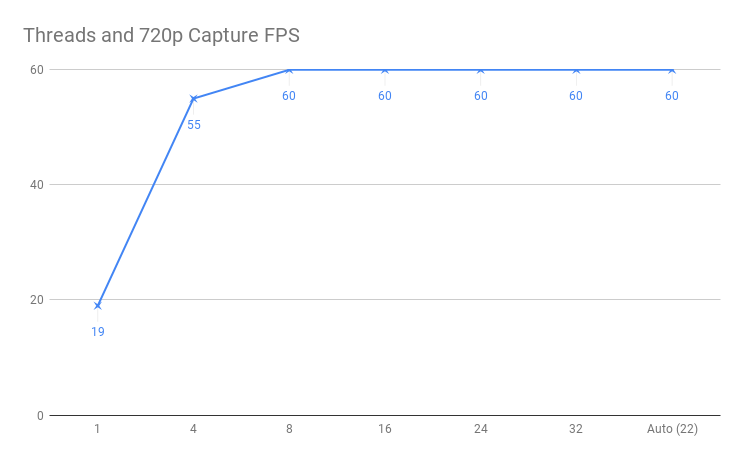 I used this FFmpeg command for these tests.

Here’s where things get interesting. My assumption was that the threads setting would have minimum impact on quality. My initial tests simulated VOD encoding of a very hard to encode file at 1080p60 @ 3 Mbps (see FFmpeg command above), a very challenging encode. The graph below shows the VMAF value for each stream encoded at the designated thread count (I tuned all files for PSNR for the VMAF scoring). As you can see, the quality drops as the thread count increases for a total drop of .62 VMAF points. For perspective, it takes 6 VMAF points to create a “just noticeable difference” that 75% of viewers would notice. So, the drop of .62 would be noticed by few viewers. 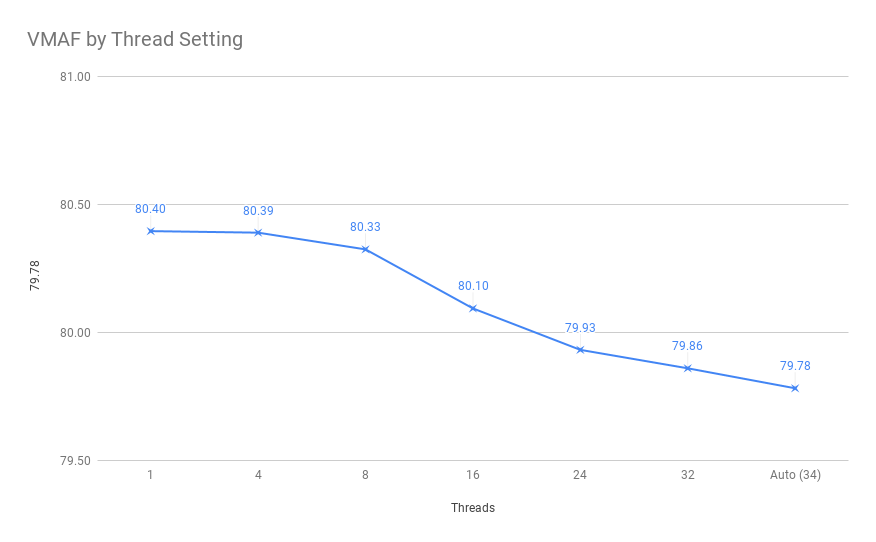 Next, I measured VMAF quality of the simulated live capture streams which I show below. Here the VMAF value varied by 1.98 points from highest to lowest, still under the 6-point threshold but getting to be a real number. What’s interesting about the live scenario is that there is no downside for chasing this quality improvement so long as you achieve real-time encoding. So, if the computer could comfortably output the necessary file at a threads count of 4 or 8, I would try this value. I would test with my typical source footage and output parameters before going into production to see if the benefit is similar to what I saw. 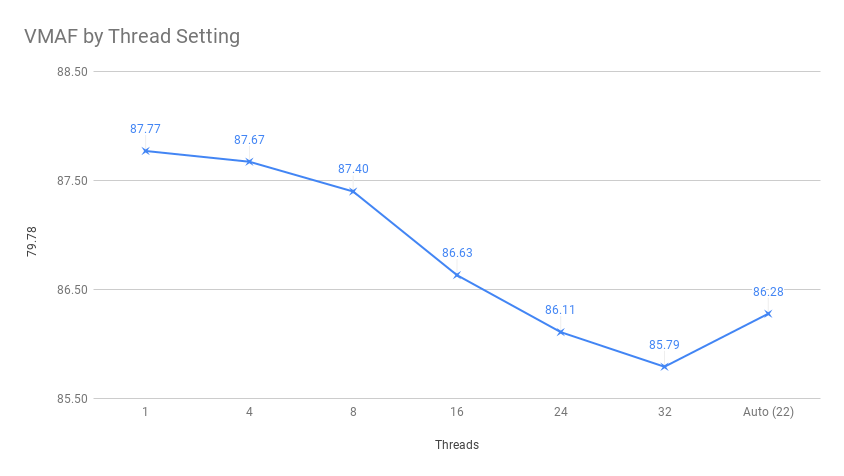 Realizing that the initial encode of 1080p60 @ 3 Mbps was unreasonably hard, I decided to test a number of files at a more leisurely 1080p @ 4.5 Mbps, encoding with 4 threads specified and no-threads specified, which on the Z840 ended up using 34 threads. Here’s the command string for the 4-threads version; the other simply had no reference to threads.

As you can see in the following graph, the overall quality difference was minor, averaging under .2 VMAF points with the file encoded with 4 threads always higher. Certainly, this overall difference wasn’t worth chasing since the frame rate dropped from 111 to 44, cutting capacity (and increasing encoding costs) by about 60%. 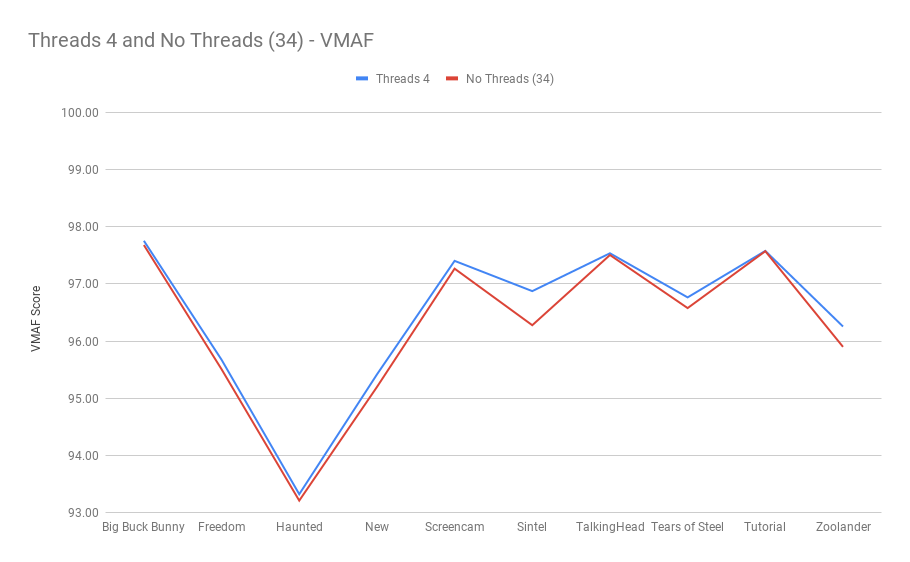 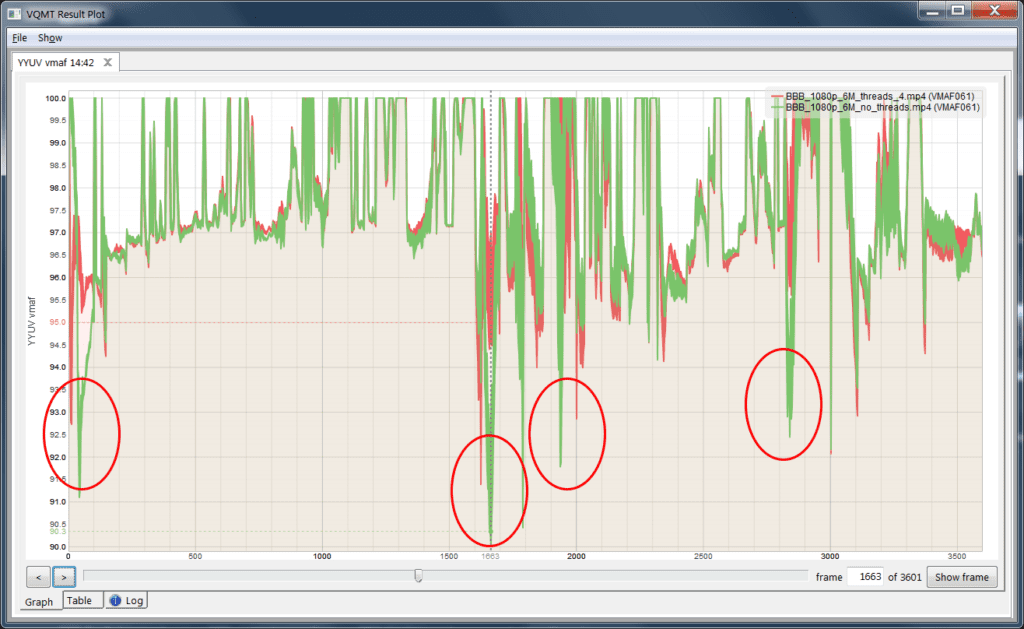 Here’s the comparison from the music video Freedom. While there are some instances where the red file pokes below the green, most of the largest downward spikes are the 34-thread encode. 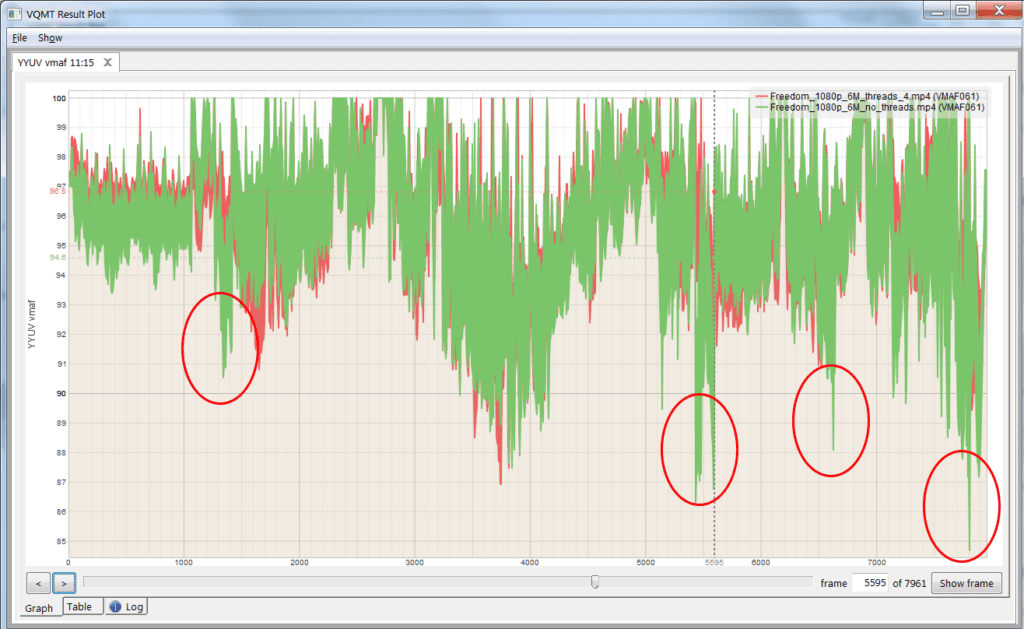 Here’s the Football clip which I encoded at 3 Mbps and didn’t include in the chart above. You see pattern only more so with one very significant and noticeable drop at the start of the clip. 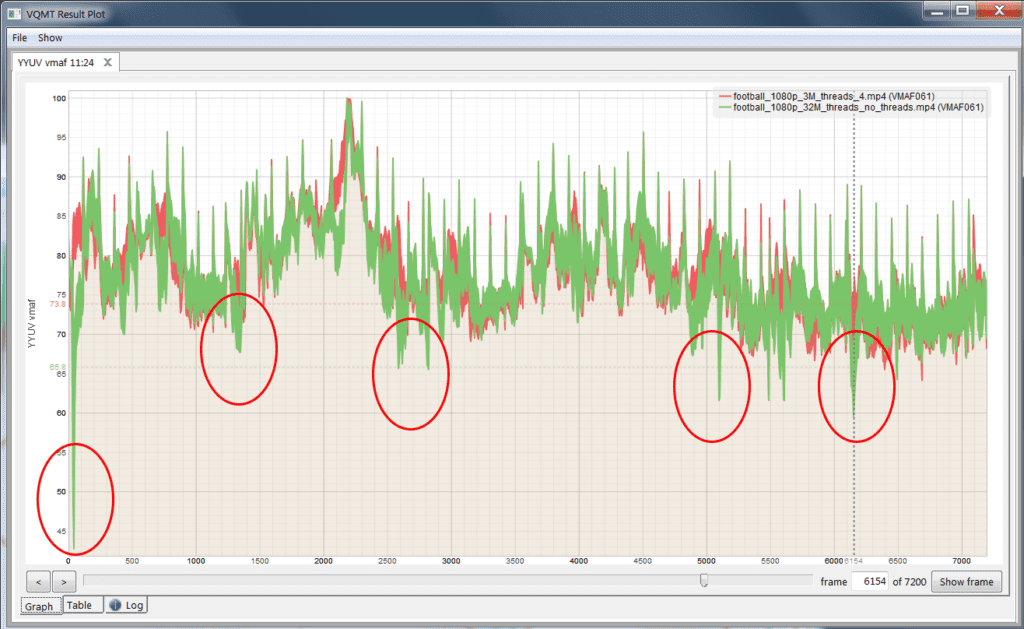 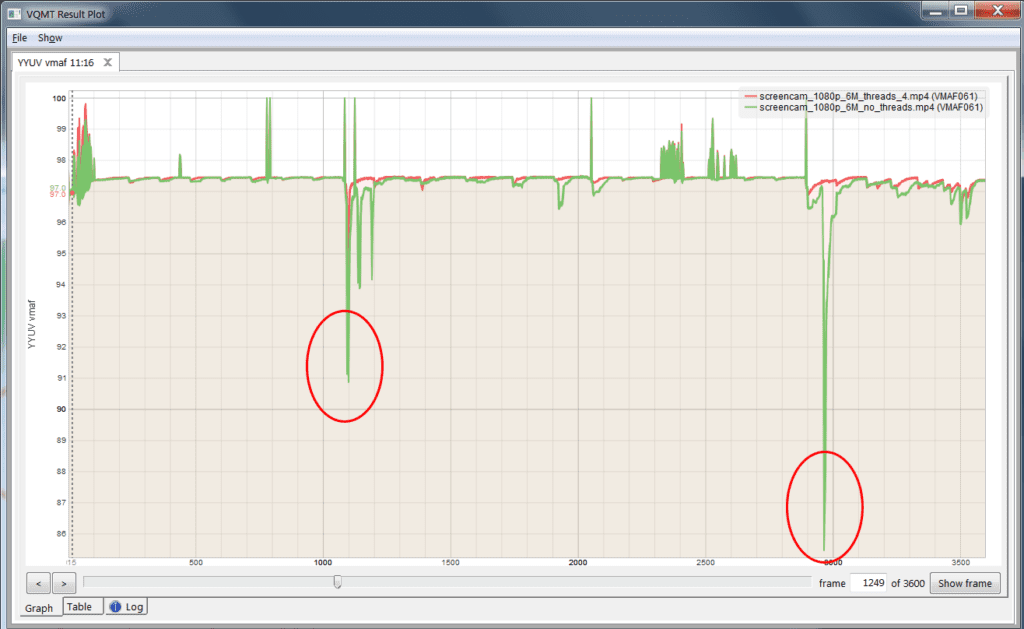 While Sintel showed many, many regions. 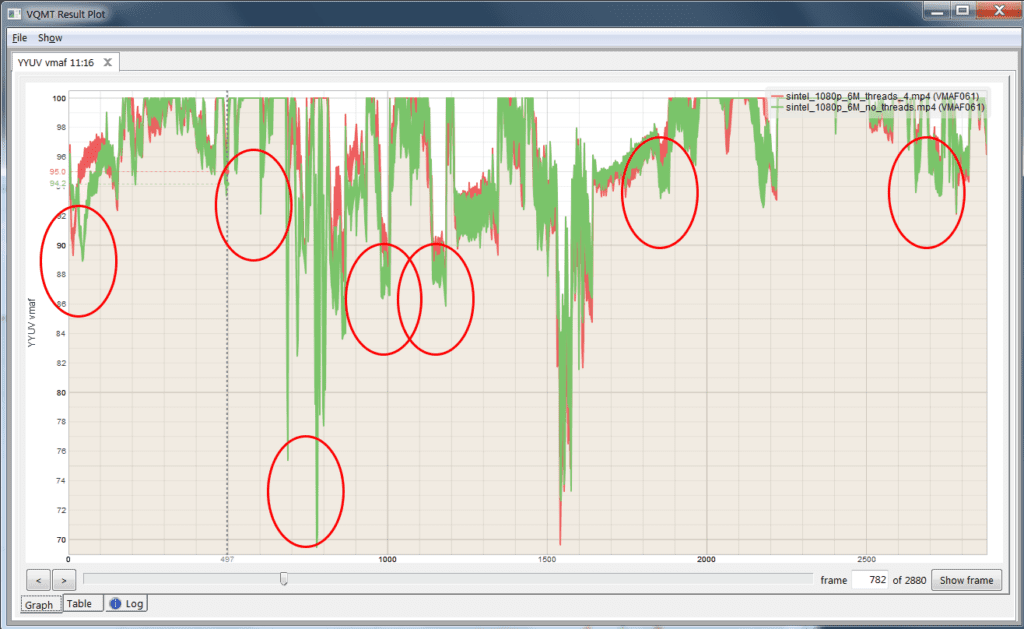 As did the Zoolander video. 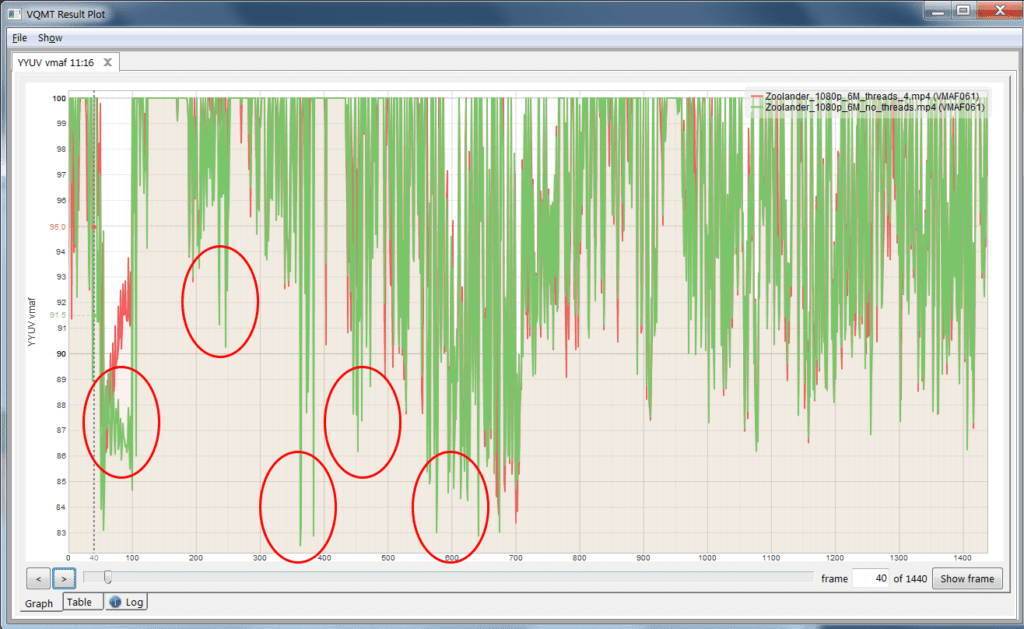 What to take from this? I will say that very few of these discrepancies actually produced frames so ugly that viewers would notice, but several did. So going forward:

This is my first deep foray into the threads command and there’s always a chance that I missed something or many things. If so, just let me know at janozer@gmail.com or via a comment below.