The VMAF Phone Model and Saving on Streaming to Mobile Viewers

One very well written help file relates to the models available under VMAF. Briefly, there are three models; the default (model/vmaf_v0.6.1.pkl), which is “trained to predict the quality of videos displayed on a 1080p HDTV in a living-room-like environment.” There’s 4K (model/vmaf_4k_v0.6.1.pkl), “which predicts the subjective quality of video displayed on a 4KTV and viewed from the distance of 1.5 times the height of the display device (1.5H).”

If your mobile ladder is the same as your desktop/OTT ladder you may be able to cut a rung or two, save some bandwidth, and allow your customers to stream more efficiently without impacting perceived visual quality.

Then there’s the phone model, which predicts quality while watching on a Samsung S5 with a screen resolution of 1080p. Here’s what Netflix says about the phone model:

“Invoking the phone model will generate VMAF scores higher than in the regular model, which is more suitable for laptop, TV, etc. viewing conditions. An example VMAF–bitrate relationship for the two models is shown below: 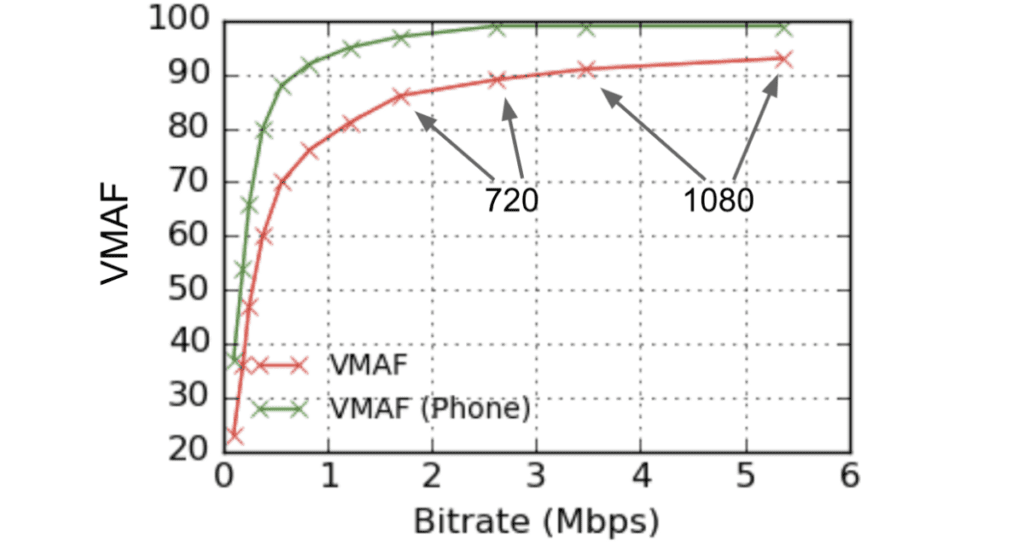 From the figure it can be interpreted that due to the factors of screen size and viewing distance, the same distorted video would be perceived as having a higher quality when viewed on a phone screen than on a laptop/TV screen, and when the quality score reaches its maximum (100), further increasing the encoding bitrate would not result in any perceptual improvement in quality.”

Another metric I frequently use on my consulting projects is the SSIMplus metric as computed by the SSIMPLUS VOD Monitor, which comes with a number of device-specific presets for mobile phones, computer monitors, and 1080p and 4K TVs. I checked, and the same relationship applies; a file that scored an 89 on a 27″ computer monitor scored a 96 on an iPhone 6. Both scores are in the excellent range, but if 89 is your target quality level, you can achieve it at a lower bandwidth on a phone than you can on a computer or OTT device.

Basically, if your mobile ladder is the same as your desktop/OTT ladder you may be able to cut a rung or two, save some bandwidth, and allow your customers to stream more efficiently without impacting perceived visual quality. I’ll be testing this over the next few months and will report back. In the meantime, look out for a blog post on what VMAF-Master is, where to get it, and how to use it.