Nine members of the MPEG LA HEVC patent pool are leaving the pool and now will be included within the HEVC Advance HEVC pool. This changes the balance of power between these two pools, though licensees who signed with the MPEG LA pool before the departures will continue to have coverage for these patents going forward. The MPEG LA pool, which has more than twice the licensees of HEVC Advance, continues to contain a very significant share of HEVC-related patents. The story was first reported by Richard Lloyd in IAM here (subscription required) and the story contains significant analysis not covered here.

Those leaving the MPEG LA pool are marked by an asterisk on the MPEG LA licensor list and include Electronics and Telecommunications Research Institute (ETRI), Korean Broadcasting System (KBS), Nippon Telegraph and Telephone Corporation (NTT), and NTT DOCOMO, INC. All those leaving MPEG LA were already part of the HEVC Advance pool. To explain, patent owners can join more than a single pool. When this occurs, if a company implementing the technology takes a license from both pools, they’re paying twice to use the same patents. In this case, they can (and should) seek a refund of this double payment from one of the pools.

According to numbers supplied by HEVC Advance, the HEVC Advance pool now includes around 10,800 patents. In contrast, the MPEG LA pool contains around 7,400 patents. Both pools share around 5,160 patents from companies like Canon, JVC Kenwood, Samsung, NEC, and Ideahub.

I spoke with Larry Horn, President and CEO of MPEG LA, who confirmed the departures but explained that each Licensor agreed when they joined MPEG LA’s pool that even if the Licensor subsequently terminates, licensees who join the pool before their termination get coverage under all essential patents that the Licensor (and its Affiliates) presently or in the future has the right to license or sublicense. So the departures don’t affect current pool licensees. He shared that MPEG LA has around 345 licensees, including nineteen recently signed vendors, which included market leaders like Acer, ARRIS, ASUS, GoPro, HP, Salient Systems, Technicolor and Xiaomi. Horn’s final point was, “the license continues to provide substantial coverage at a reasonable royalty rate, is widely accepted by the market as demonstrated by its substantial number of licensees and continues to generate significant revenue for our patent owners.”

Commenting on the MPEG LA departures, HEVC Advance CEO Peter Moller stated, “many companies want consolidation in the HEVC IP arena and we’re trying to facilitate that.” Moller shared that many licensors have jointed the HEVC Advance pool in recent months, including JVC Kenwood, NEC, and NTT and NTT Docomo. Notably, both Huawei and LG joined HEVC Advance as both licensors and licensees, with Huawei one of the largest previously unaffiliated owners of HEVC-related IP. Technicolor is another notable company that signed on as a licensee in the HEVC Advance pool.

Full Speed Ahead for VVC

Interestingly, both companies hope to form a pool for the upcoming MPEG standard Versatile Video Coding (VVC), which should be released by the end of 2020. VVC is MPEG’s first major post-HEVC video codec and there was hope that the Media Coding Industry Forum (MC-IF) would streamline its IP, including using a tool called “patent pool fostering” to encourage those contributing IP to the standard to join a single pool. In addition to MPEG LA and HEVC Advance, MC-IF members Sisvel and Velos Media (both patent pool administers) are presumably also seeking to form a pool, or to at least vie for the role of single pool administrator if MC-IF is successful.

There’s nothing inherently wrong with multiple pools for a single technology, which frequently occurs. However, there’s no doubt that HEVC’s three-pool licensing structure delayed its adoption and arguably still does as it relates to HEVC-encoded content. How the VVC pool situation plays out will be an interesting barometer as to whether the MC-IF and the patent owners can create a more adoption-friendly framework for potential technology implementors.

I help companies train new technical hires in streaming media-related positions; I also help companies optimize their codec selections and encoding stacks, and evaluate new encoders and codecs.
Previous Another Five-Star Review of Video Encoding by the Numbers
Next Using a Simple Wildcard Command in FFmpeg 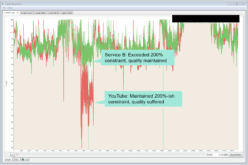 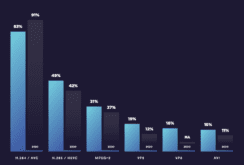 Every year around this time, like an early Christmas present, Bitmovin releases its Annual Video …