Lots going on in the codec world, lots to analyze. But for the most part in this article, I’m going to let the pictures do the talking.

I’m a big fan of Moscow State University tools and reports. Unlike many codec analysts, MSU asks the codec vendors to suggest the settings used for the encodes, ensuring a fair result, and the group always tests with a wide range of videos. In the most recent comparison, MSU tested 13 codecs with 28 videos using multiple quality metrics, including Y-VMAF, Y-SSIM, U-SSIM, V-SSIM, YUV-PSNR, Y-PSNR, U-PSNR, and V-PSNR.

MulticoreWare’s x265 codec gets a lot of attention as the HEVC codec available in FFmpeg and as recently as 2015 was the HEVC quality leader. However, in this year’s report, MSU found that four HEVC codecs outperformed x265, as you can see in Figure 1 below (VMAF metric). 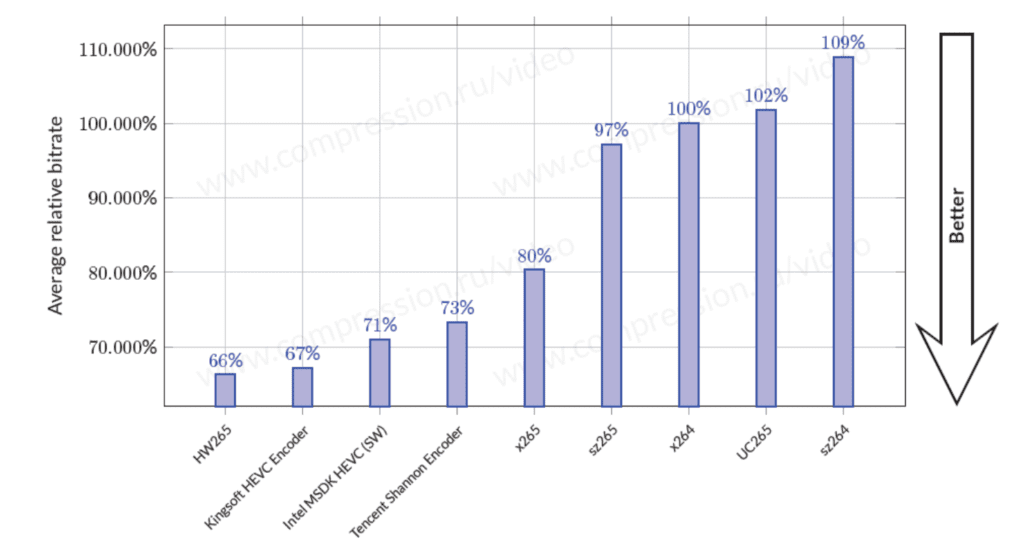 Specifically, Figure 1 compares all HEVC codecs with the VMAF metric and setting the x264 H.264 codec at 100. The HW265 codec, Huawei Technologies, proved about 20 percent more efficient than x265, which is a significant advantage, and encoding speed was middle of the pack.

If you’re considering licensing an HEVC codec, the MSU report is a must, particularly if x265 is on your shortlist. Note that there are two report versions: a free version with a subset of tests and analysis, and the $950 version which includes all test results and over 5,000 charts.

MSU also has an ambitious roadmap for additional studies in 2018, including subjective quality comparisons of the same videos due out in early October and a 4K report that will focus on ultra-high quality presets and will include AV1. So stay tuned.

Before IBC, Bitmovin published its second annual video developer report, which included 456 survey submissions from over 67 countries, and asked questions about current and planned codec and format usage. In terms of current codec usage, HEVC made the most headway, as you can see in Figure 2, with usage increasing by 50 percent. Imagine what could have been with a fair and cohesive royalty policy. In contrast, VP9 nudged upwards by a mere 10 percent.

Looking ahead, however, Bitmovin’s respondents were most bullish about AV1, as you can see in Figure 3. Here, planned usage more than doubled from 14 percent to 29 percent, with both HEVC and VP9 dropping. I wonder how many of these respondents know how long it actually takes to encode AV1 files. 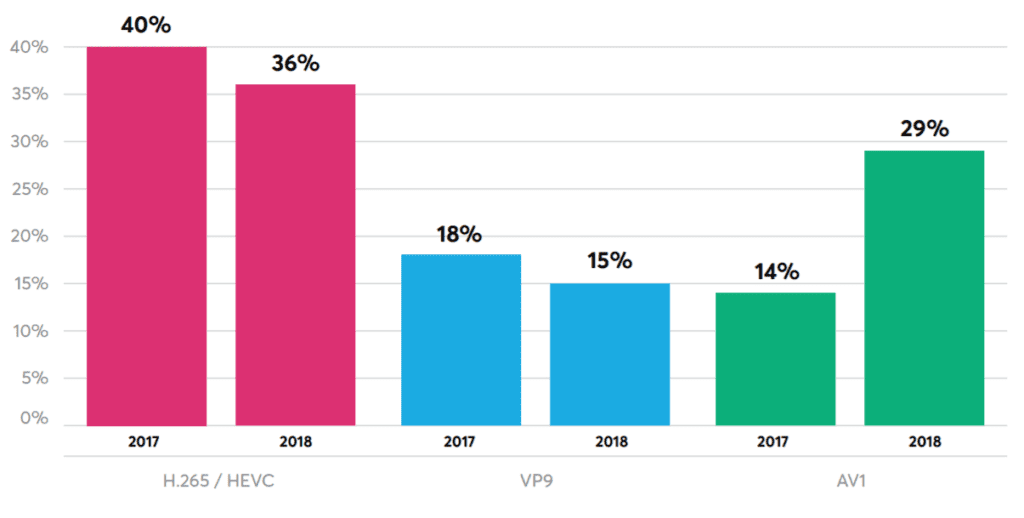 Figure 3. Answering the question, “Which video codecs are you planning to use in the next 12 months?”

There’s lots more interesting data in the Bitmovin report, including streaming formats deployed (HLS, DASH, and Smooth are still the top three), and DRM use. The report is available for free download (registration required).

Well, sort of. Netflix made one clip available for download while YouTube posted 14 videos with some layers available in AV1 format; others in VP9.

What did we learn? Well, we care about three performance related data points when it comes to a new codec; encoding time, quality, and decode requirements. Neither company disclosed encoding time data, but we learned something about the latter two.

Regarding quality, we learned that neither Netflix or YouTube is pushing quality yet. Here’s MediaInfo on one of the Netflix clips; At 6.7 Mbps for 1080p@24 fps, Netflix is hardly stressing the codec.

YouTube is a bit more aggressive with its encodes, as seen in Figure 5, but 5.1 Mbps for 1080p60 is still not pushing the quality envelope. As an example, I just finished a consulting project analyzing VP9 and H264 quality at 1080p60 and our test data rates ranged from 3 to 6 Mbps. For the record, YouTube did say, “At the time of writing, these transcodes are encoded at a very high bitrate for decoder performance testing.” 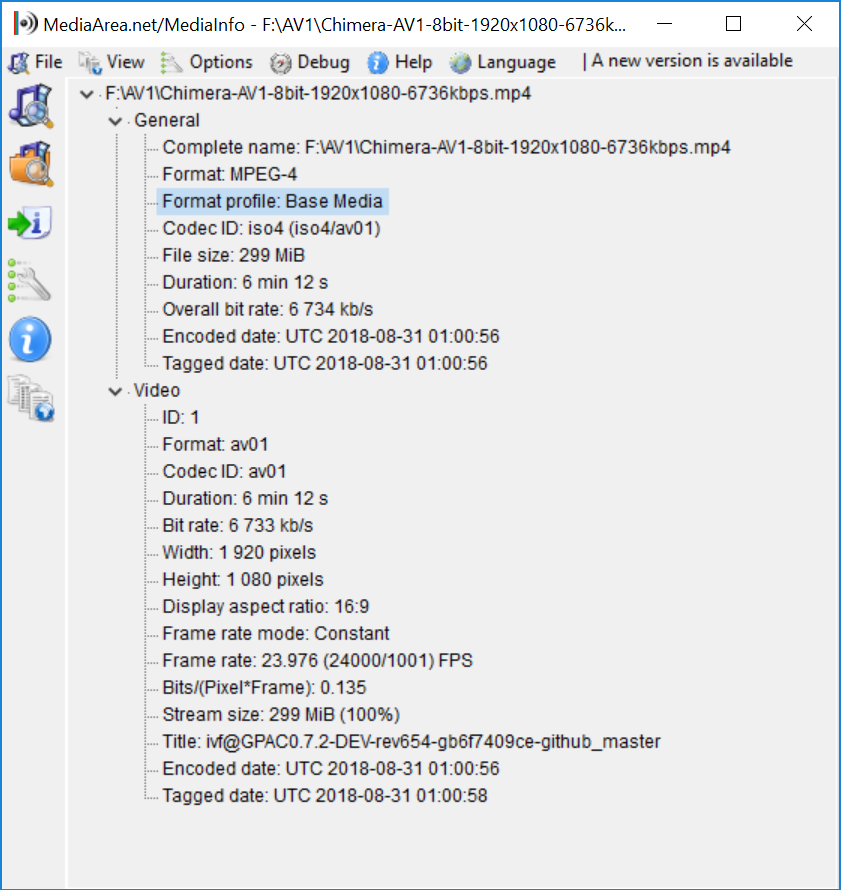 Figure 5. YouTube is a bit more aggressive but still isn’t pushing the envelope.

What about decode requirements? In order to play the YouTube videos, you’ll need to download Chrome Canary; there’s a version of Firefox that’s supposed to work, but I couldn’t find it. You’ll also have to go to the YouTube Testtube and choose your preferences regarding AV1 playback. If you choose like I did in Figure 6, you’ll get up to 1080p video in AV1 format.

One major concern I had with AV1 in my First Looks review was playback CPU requirements. For the most part, these were allayed. Figure 7 shows CPU requirements playing back 1080p video on the same notebook I used for the review (HP ZBook notebook powered by a 2.8 GHz Intel Xeon E3-1505M v5 CPU with an NVIDIA Quadro M1000M graphics chipset along with the HD Graphics 530 GPU embedded in the CPU). At 20 percent, c’mon in, the water’s fine. 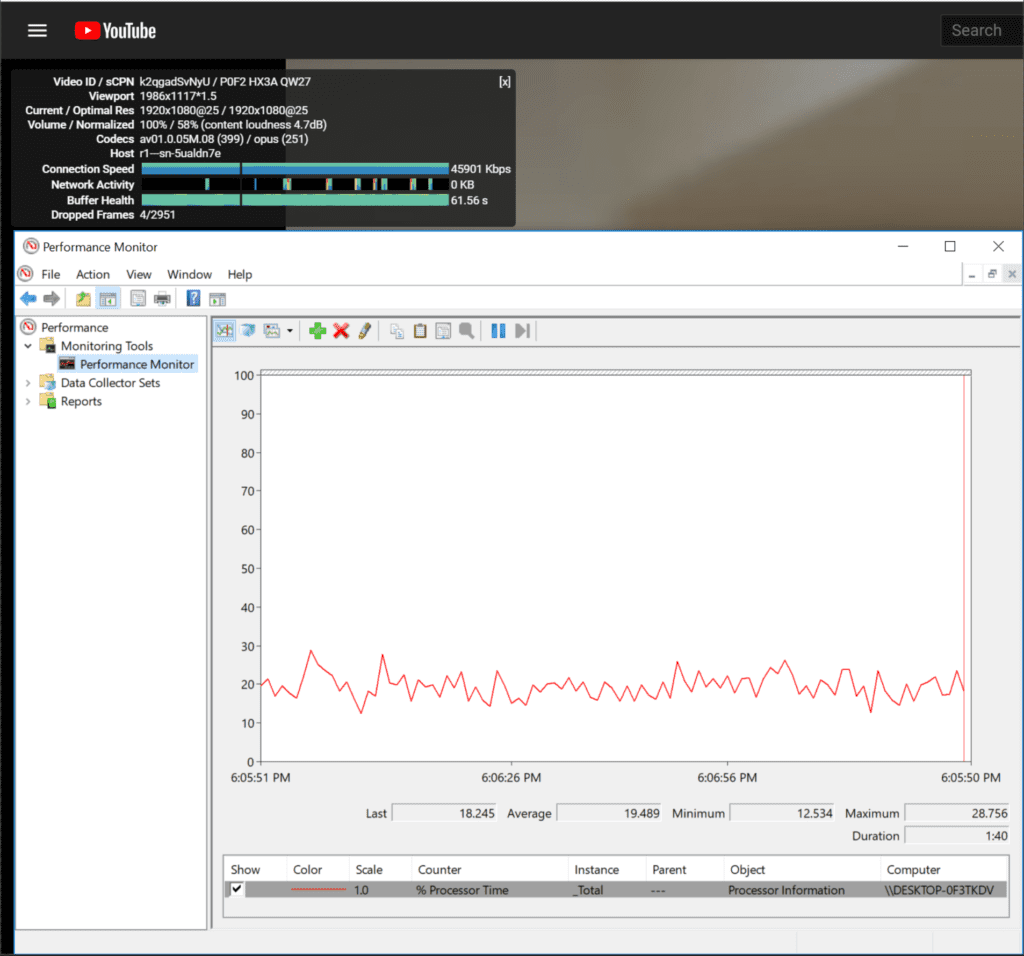 On most of the videos I played, I had no issues. On two, however—the Halo Trailer and Hello Sexy Pants (it’s research, people!)—I had severe issues, including slow downs and stoppages. These didn’t appear to be related to either CPU or network issues, so I’m not sure what was going on.

You see the frames dropped in Halo in Figure 8; this screen grab is from the ZBook, but I got the same results on my 40-core Z840 workstation, seemingly indicating that it’s not a CPU issue.

Figure 8. I had severe issues with the Halo trailer.

Figure 9 shows the frame drops in Hello Sexy Pants. Note that playback on all other videos that I tried was problem free, which left me scratching my head.

The major point is, however, that AV1 will likely play on a whole lot more machines than I originally thought, which is a good thing. Kudos to the AV1 and Chrome teams for making this happen. That said, without major reductions in encoding time that appear to be coming soon, AV1 is still only appropriate for publishers who routinely get seven figure views for their videos. I  look forward to testing with Firefox in the near future.

At press time, we saw a tweet from Bitmovin CIO and co-founder Christian Timmerer, who was attending the 2018 IEEE International Conference on Image Processing running October 7 to 10, 2018 in Athens, Greece. One presentation discussed performance enhancements with the AV1 codec, and Timmerer posted the slide shown in Figure 10.

You can read as well as I that the improvements appear substantial. We’ll verify them when they make their way into FFmpeg. For the record, in our AV1 First Look, we encoded with cpu-used=0, and AV1 encoding time was about 1,000 times longer than VP9. Dropping that to 40x would dramatically change the breakeven point for AV1 encoding and make the codec useful to a much broader group of producers. 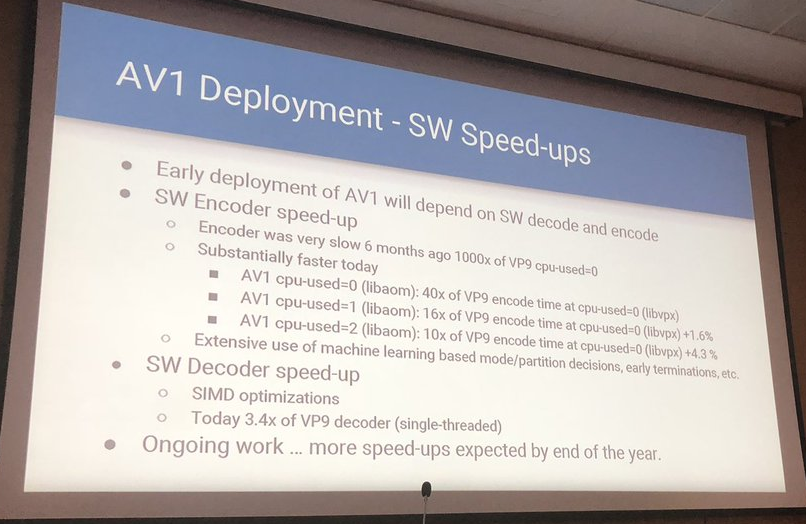 At IBC, AOMedia member BBC discussed a paper showing that AV1 had only a 2 to 7 percent quality advantage over HEVC (HM in Figure 9) and that the upcoming Versatile Video Coding technology (JEM in the figure) averaged about 25 percent savings over AV1 and 31.5 percent over HEVC. As a broadcaster and AOMedia member, BBC obviously has lots of credibility and these results are disappointing for AV1 and impressive for VVC. You can read more about BBC’s tests. Harmonic and Ateme also released papers with less than favorable results for AV1. Of course, absent a major shift in royalty policy, VVC may find itself hobbled by the same uncertainty that stunted HEVC’s growth, and VVC deployments are years away. 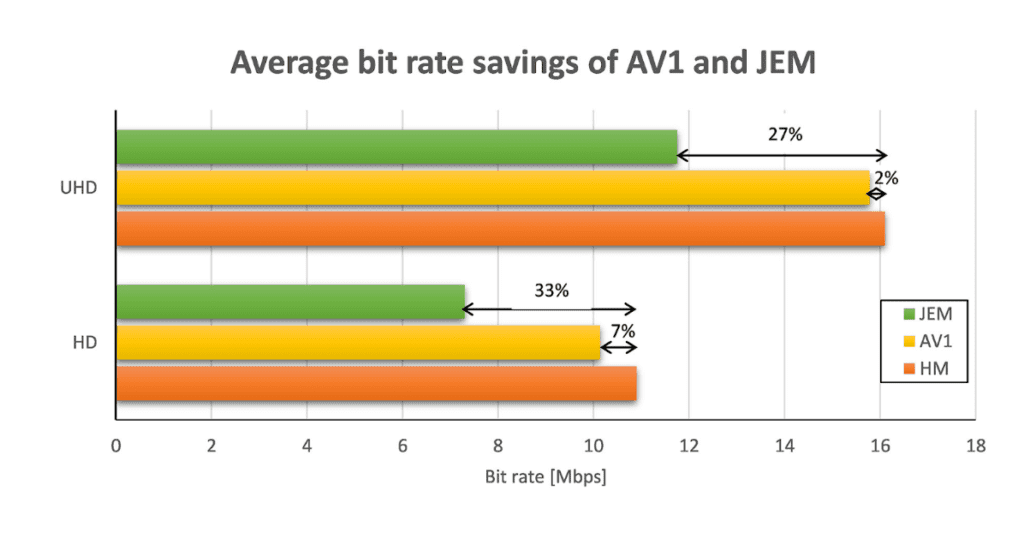 As the commercial antithesis of the hugely unpopular HEVC codec, AV1 has enjoyed breathless approval from much of the technology press, and as evidenced by the Bitmovin survey, by many in the user community as well. At some point, however, the codec has to prove itself both within and beyond its founding members. It’s still early days, and AOM has made some impressive performance gains, but we look forward to observing the bitrates used by actual deployments at scale to identify the real world benefits that the codec delivers.

I help companies train new technical hires in streaming media-related positions; I also help companies optimize their codec selections and encoding stacks, and evaluate new encoders and codecs.
Previous Playing AV1 in Firefox Nightly
Next Join Me at the Battle of the Codecs Tonight